Meriden is a small, working class city in New Haven County. Meriden originally was part of Wallingford.  It was granted a separate meeting house in 1727, became a town in 1806 and incorporated as a city in 1867.  Meriden has so much to offer with its convenient location and beautiful landscape. 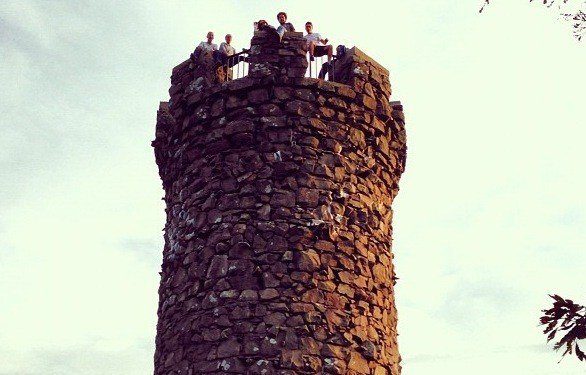 Meriden is connected to the cities of New Haven, Hartford and Springfield, MA by regional rail service provided by Amtrak. Meriden is located on Interstate 91, providing very easy access to the above mentioned major cities.  Meriden has proven to be a great city to consider if you are a business owner or face a daily commute since it is so centrally located and affordable.  The fantastic location at the intersection of I-91 and 691 as well as the Merritt Parkway and Rt. 5, makes Meriden the “crossroads of Connecticut”.  The city is well laid out and fairly easy to navigate. Meriden is worth taking the time to get to know.  It is a small city which does face some of the usual urban issues you would find in any city, but Meriden is different in that it has a low crime rate, a small town feel where neighbors help each other and it really is a great place to live, work, raise a family, start a business and thrive. 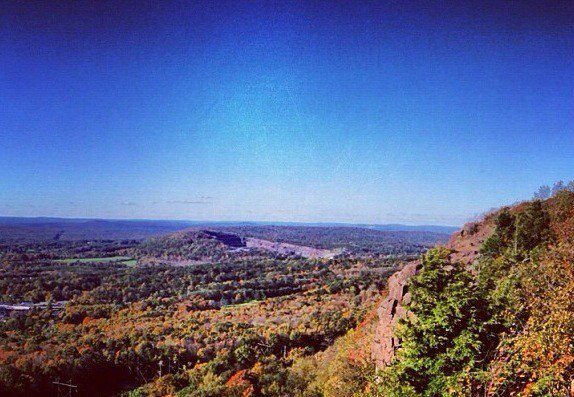 Meriden features a capable work force, beautiful parks and open spaces, award winning schools, civic and cultural organizations and a very active faith community.  It is also home of the annual Meriden Daffodil Festival in Hubbard Park, which is a sight to see.  The Meriden Daffodil Festival began as a community event 34 years ago and has grown into one of Connecticut’s premier celebrations. With food, local crafts, music, fireworks, amusements and a parade that has to be seen to be believed, the Daffodil Festival is a springtime funfest for old and young, couples and singles, families and friends.   600,001 daffodils can’t be wrong!  They create a sea of fragrant yellow blossoms throughout the beautiful 1,800-acre Hubbard Park.  This is the kind of event that takes careful planning and brings the entire community together.  It really is a sight to see. 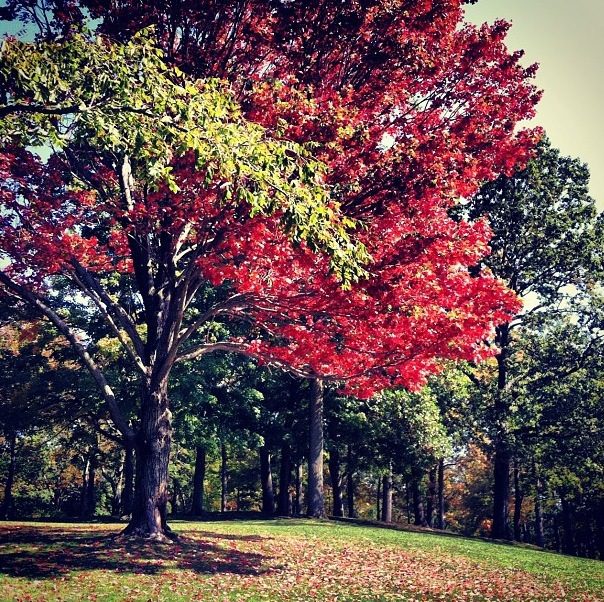 Speaking of Hubbard Park, what a great asset to the city!  The park has a large pond with lots of ducks to amuse the kids and now has a new playscape as well.  There is something in this park for everyone!    The entire park is laced with numerous hiking trails that meander through the 1000+ acres of land. The trails offer a great way to see the park and also offer incredible views. Some trails are maintained by the park and the main Blue-Blazed trail is maintained by the Connecticut Forest and Park Association. The Blue-Blazed trail leads you along most of the ridge lines and offers the best views.  With a little bit of climbing, you will arrive at Castle Craig (a city landmark), which is a 32 foot tower built back in the early 1900’s.  It’s a great climb to the top of it and you are rewarded with excellent views of the surrounding area. You can usually see Long Island Sound from the top of the tower.  In the winter, the park becomes a wonderland of Holiday lights.  People are allowed to drive through the park and see all the lights. There are also some perfect places to go sledding.  With snow on the ground, the view becomes extremely magical.   There is tons of open space around the main part of the park to picnic, spread out and relax, play catch, or even fly a kite. The band shell houses wonderful concerts with both local groups and also some bigger acts in the spring.  There is plenty of free parking either along the edge of the lake, at the entrance of the hiking trails, or in a large parking lot, so everything is easily accessible.  In the summertime, the pool is open to residents who buy a pool pass.  In the fall, the foliage is absolutely beautiful to hike through.  There is no lack of family friendly things to do regardless of the season.   Meriden makes sure to keep up with making family activities a priority for its residents. 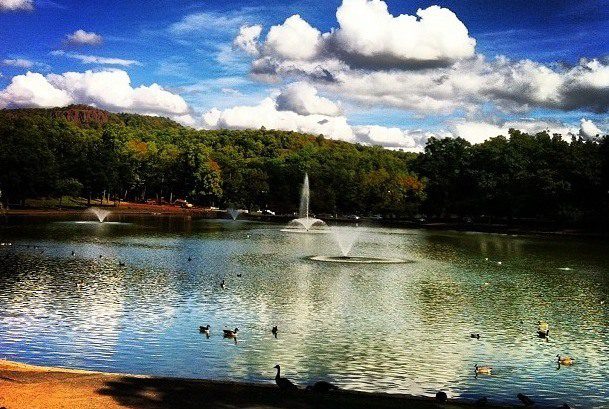 There is so much beauty to behold in Meriden, I notice something left unseen nearly every time I go which makes it such an interesting place to spend time.  Meriden is a showcase for several prominent peaks of the Metacomet Ridge, a mountainous trap rock ridgeline that reaches from Long Island Sound to nearly the Vermont border.  Notable peaks include the hanging hills, Lamentation Mountain, Chauncey Peak and Besek Mountain. If the natural beauty has not yet put a skip in your step, you should make time to see where the Quinnipiac River cuts through the Southwest quadrant of the city, which is known to the residents as “South Meriden”.  This is where the river cuts through 2 hills for nearly a mile, resulting in a gorge full of exposed sandstone and Brownstone Cliffs.  Words can’t really describe how beautiful this is to see on a clear day. Meriden has two principal communities known as “Meriden Center” and “South Meriden”.  The city offers both public and private schools and makes education and safety a priority for all of its residents. 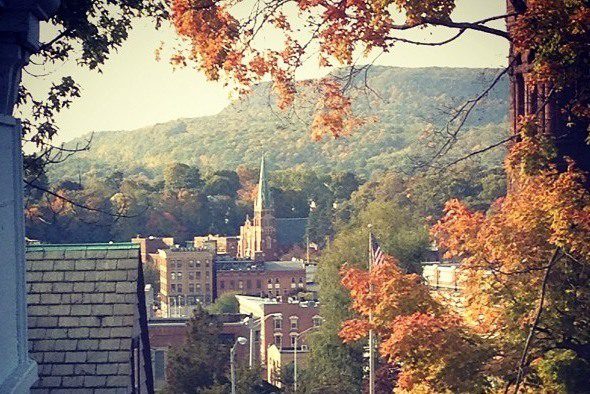 Meriden has so many interesting points of interest; you can treat yourself and your family to little adventures daily, while remaining in your home community.  Some of my favorite things to do while in Meriden:  Giuffrida Park (offers plenty of outdoor recreation), beautiful hiking trails and the lake, Hanging Hills, Hunter Golf Courses, The Meriden Linear Trail and yes,  although Ted’s Restaurant is not part of the outdoor recreation, it is  a landmark in the city of Meriden.  Ted’s serves steamed cheeseburgers that are so incredibly delicious; they were featured on the Food Network as one of the best burgers in America.  Walking into Ted’s takes you back to a time that was less complicated and the food was simply, good.  While visiting Ted’s, you will notice that nothing happens behind the scenes.  What you see is what you get and what you get is always amazing and a true taste of local flavor. Meriden is a city that should not be overlooked when considering settling into a new home.  It’s an interesting city that has a small town feel and seems to always have something planned to keep its residents engaged in their community.  There is never a shortage of things to do, whether you’re raising a young family, are an outdoorsman, a business owner or are a commuter looking for a great city that is centrally located.  Meriden is a city that strives to keep its streets clean, parks manicured, residents happy and safety of the upmost importance.  The Meriden business community is very strong and has the backing of a great Chamber of Commerce that consistently advocates for the businesses in town to create longevity.  Meriden is worth spending some time in to really appreciate all the charm it has to offer.
Find out more & Search local Homes!